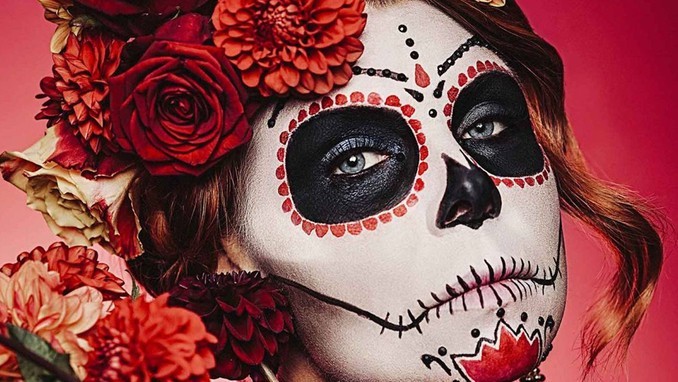 There’re so many traditions to learn about the world-famous Mexican celebration of the Day of the Dead. Whenever mentioned, it brings to mind images of traditional skulls, make-up and face paint that many use to celebrate the fabulous holiday on November 1 and 2 each year. Not to be confused with Halloween, the Day of the Dead is a celebration of All Saints’ Day and All Souls’ Day.

But do you know why we paint our faces like this or the origin of this Mexican tradition? This actually has to do with an interesting piece of art dating back to 1910.

The story begins with a work of art created by Mexican engraver, illustrator and caricaturist José Guadalupe Posada named, "La Calavera Garbancera", in 1910. This work served as an inspiration for what we now know as "La Catrina". Each year, children and adults alike wear makeup and face paint as an imitation of the original work as they celebrate the Day of the Dead in Mexico.

“La Calavera Garbancera” is small, engraved in metal and only 17x22 cm in size. “Garbancera” was the name given to people who sold chickpeas in the early 19th century, and despite having indigenous blood, these people rejected their heritage and claimed European descent – complaining about their own true Mexican race and culture.

In “La Calavera Garbancera”, a skeleton can be seen dressed in only a European-styled hat. This is a social satire of some of the caricaturists of the time toward the poor Mexican people who were trying to pretend to be European – adopting a European style that was not their true heritage. “…In the bones but with a French hat with its ostrich feathers” said Posada about his satire.

Due to his famous work, the “Catrina” was born of the world-renowned Diego Rivera, Frida Kalho’s husband, who immortalized her in his mural “Dream of a Sunday afternoon in the Alameda Central.” The Catrina comes from the masculine “catrin”, named after the elegant and well-dressed man who was always accompanied by a woman with the same characteristics at the end of the 19th century and early twentieth century. The Catrina in his mural appears elegant and well-dressed, in front of Frida Kalho, at the hand of Jose Guadalupe Posada and guarded by the self-portrait of Diego Rivera in his childhood.

Remember that at Almar Resort Luxury LGBT Beach Front Experience we have the perfect suite for your stay in Puerto Vallarta. The Day of the Dead will be an experience that you will want to share!