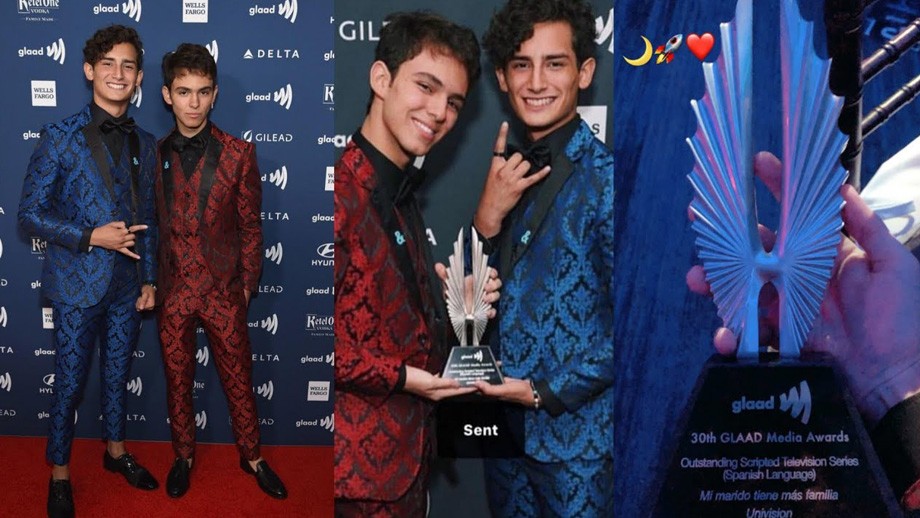 Since the Mexican soap opera "Mi marido tiene más familia" began its transmission, it caught the attention of the LGBT community thanks to the gay couple composed of the characters Aristotle and Cuauhtémoc, whom they’ve affectionately nicknamed “Artistemo”. Thanks to their charisma and talent, they won the GLAAD Media Award for Best Television Couple.
The production, directed by Juan Osorio also had another nomination for Best Series in the Spanish Language, but, it was Best Couple that excelled to win the award. The GLAAD Awards, otherwise known as the Gay and Lesbian Alliance Against Defamation, based in New York, recognize LGBT themed productions all over the world and have been rated as the best of its kind by the LGBT community.
Emilio Osorio and Joaquín Bodoni are the young actors who give life to Aristóteles Corsica and Cuauhtémoc López, (Aristemo), and of course they’re ecstatic with the award which they were first nominated for at the beginning of the year.
"Mi marido tiene más familia" competed against programs such as “Elite”, from Netflix; “Mi familia perfecta”, from Telemundo; and “Papá a toda madre”, also from Televisa. This is the first time that a Mexican television program displays an openly gay couple without censorship, making way for an evolution and leaving aside the prejudices of past productions and conservative society.
On the red carpet, the actors dressed in similar attire, and attracted attention during the event which also hosted personalities of stature such as Madonna and Sarah Jessica Parker, among other icons of international fame.
The rise of Aristemo as been so popular that preparation has already begun for a series in which the couple plays the main protagonist and it’s expected to reach the small screen in the coming months for our enjoyment.
Aristemo is a love story between two teenagers which all of us can relate to, with whom the LGBT community has identified with and of course, who is more than happy with their achievement in the GLAAD Media Awards.
Photo: YouTube