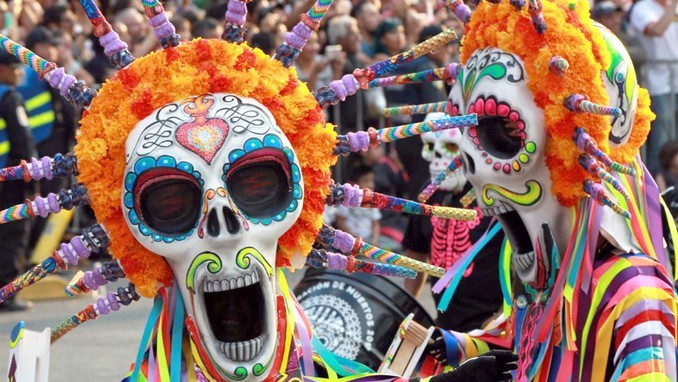 This famous Day of the Dead bread is one of the most representative gastronomic delights that we look forward to each season. This tasty sweet bread is slightly flattened, spherical shape, at the top it has a small sphere that represents the skull that is right at the center of four cross-shaped lines called "canillas". These represent the bones of arms and legs.

It’s believed that the marigold’s striking yellow-orange tone guides the loved ones who are coming to visit on their path. This is why you’ll see marigolds and marigold petals decorating every corner the Day of the Dead festivities.

Altar of the Dead and the Four Elements

Each altar of the Day of the Dead must represent the four elements. Water is placed in a container originally made of clay. The fire through the candles. The earth is represented with fruit obtained from it and the wind through the colorful chopped paper.

Origin of the Tradition

The Day of the Dead is an indigenous celebration that was celebrated before the arrival of the Spaniards. When the colonization arrived, it merged with Catholicism.

What is the Catrina

The image of La Catrina is one of the most representative of this celebration. It was created by the Mexican engraver, illustrator and caricaturist José Guadalupe Posada and baptized with that name by the muralist Diego Rivera, Frida Kahlo's husband.

When is the Day of the Dead?

The original celebration lasted about two months - from July 16 to August 5 - but the Catholic Church decided to move the date to coincide with the catholic traditions.

In the offerings, more elements are placed although it is not obligatory to use them. For example, incense, to purify the energy, sugar skulls to decorate the altar, a dish with salt to purify the soul and a cross to represent the four cardinal points and synonymous of Catholicism.